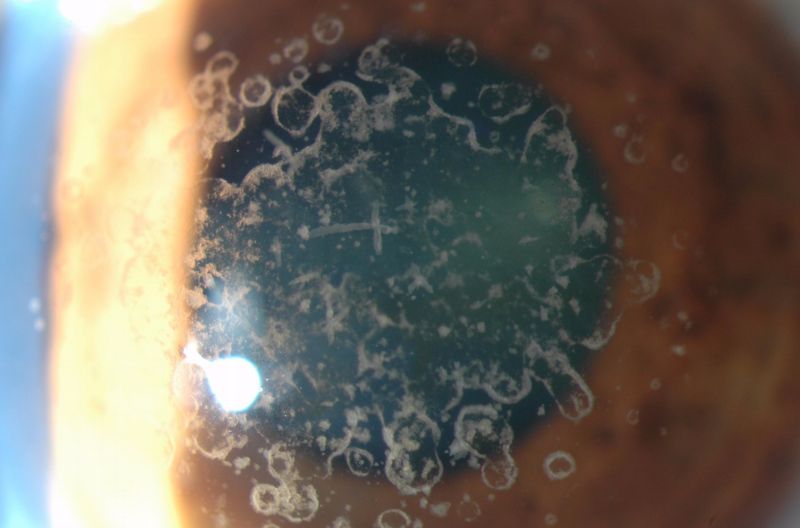 Over 20 different corneal dystrophies have been described.
This can appear from childhood to old age.
Fuchs’ dystrophy is one of the main causes of corneal transplantation.

What is corneal dystrophy?

Corneal dystrophies are a group of corneal diseases considered rare or minority, and that are often genetic. There are many different types that are generally characterised by affecting both eyes and causing a loss of transparency in the cornea, the eye’s “window”. This gradually turns opaque due to the accumulation of foreign material (fluid, deposits, etc.) on one or several of the layers forming it, thus altering its structure and normal function.

Depending on the location of the dystrophy, the following can be told apart:

Endothelial dystrophies: these damage the innermost layer of the cornea, resulting in it “misting” due to accumulated fluid, with the consequent loss of vision. The most frequent is Fuchs’ dystrophy, one of the most frequent causes of corneal transplantation at present in the western world.

Because they are genetic, corneal dystrophies are present from birth, but can also begin to appear at extremely wide-ranging ages: from childhood to adulthood (40-50) or old age (70-80, as with Fuchs’ dystrophy). If they appear in small children they might cause lazy eye.

The most characteristic symptom is blurred vision or, more directly, the gradual loss of vision. Some of these dystrophies might be associated to recurrent corneal erosions, as well as photofobia and the feeling of gritty eyes or a foreign body in the eye. 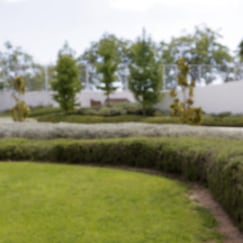 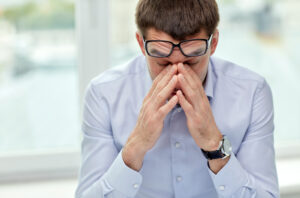 Despite being genetic, only some cases of corneal dystrophy are clearly hereditary. Remember that your family background might be of use when checking the vision of children to detect early signs of the disease.

Treating corneal dystrophies differs considerably depending on the symptoms of the disease and its progression. Therefore, minor dystrophies do not often require specific treatment, although if this is your case you must attend the regular check ups indicated by your ophthalmologist to control their evolution.

If you repeatedly suffer from corneal erosions, you will have to follow a treatment with eye drops or laser, in the most severe cases, to protect the integrity of the cornea, avoid infection, and encourage tissue scarring.

If you suffer an oedema or pain due to the disease at any time, we might have to apply an eye drop or ointment to relieve the symptoms, and you might have to wear a contact lens to provide the infected eye with extra protection.

Finally, when the cornea has lost transparency to the point that there is significant and irreversible vision loss, the specialist might recommend corneal transplantation, which we perform at the Miranza clinics using the most modern and least invasive techniques. 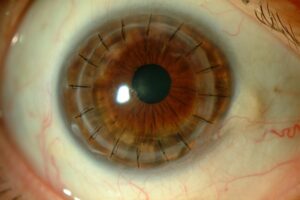