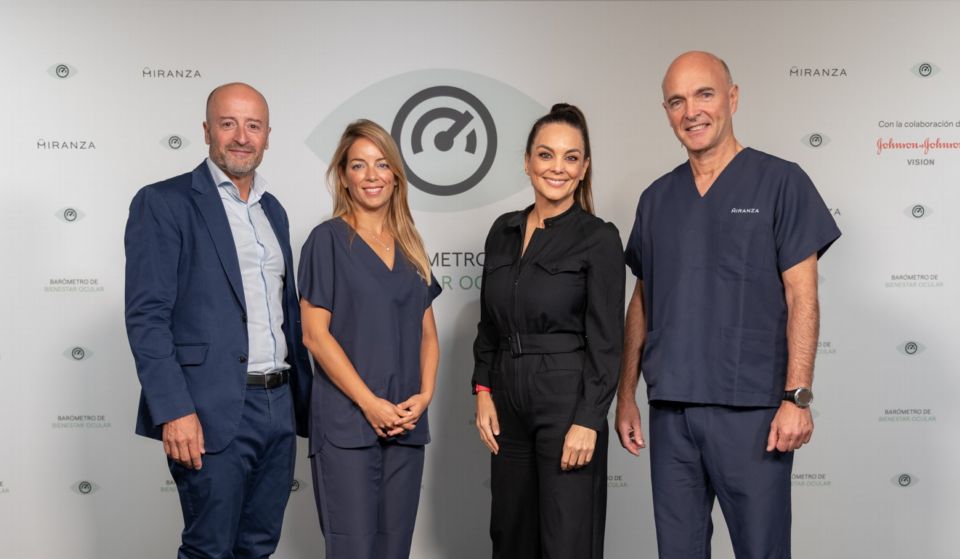 Miranza’s second survey on eye wellness in Spain, with the collaboration of Johnson & Johnson Vision, has resulted in a score of 5.24 out of 10. In celebration of World Sight Day (13 October), Miranza Group has assessed eye wellness in Spain through a survey taken by over 1,000 participants. Doctors María Gessa and Jaime Aramberri, the respective medical directors of the Miranza Virgen de Luján and Miranza Ókular centres, released the survey results today in an event hosted by journalist Mónica Carrillo.

The results show that eye wellness in Spain barely makes the passing grade and even fails in the age group of 41 to 65, where the survey yielded a score of just 4.93. The scores reflect the participants’ perceptions of their own eye wellness and quality of vision (respective average scores of 5.83 and 6.11) in addition to more objective factors, such as reliance on low-vision aids, difficulty in carrying out activities and the existence of diagnosed vision-related symptoms and problems.

The greater part of those surveyed considered their eye wellness to be acceptable, with 74% describing their condition as normal, good or excellent. Nonetheless, if we turn our attention to the latter two responses, the percentage falls to 35%, which means that just over one-third of the participants were actually satisfied with their vision.

Nonetheless, the results suggest consensus regarding the impact of ageing on visual health, as 86% of those surveyed largely or completely agreed with the concept, especially among those between 41 and 64 years of age (90% of this age group agreed).

Moreover, although most Spaniards said they were aware of the importance of eye care (92%) and 8 out of 10 believed that annual check-ups are a necessity, only 71% of the young individuals surveyed said they were necessary. Of those surveyed, 68% stated that vision added to their enjoyment of life and that vision-related problems gave rise to social or psychological problems for 10% to 20% of the population.

However, when addressing the subject of eye care, over half of those surveyed said they had check-ups only once every two or three years or less frequently. Experts agree that this is an area that should be targeted for improvement.

In fact, many Spaniards with diagnosed visual problems have sought no treatment, and most reject the notion that a change in lifestyle may lead to improvement.

The results show that over half of those surveyed who had a diagnosed problem had received no treatment, the exceptions to this being those affected by glaucoma (59%), short- and long-sightedness (45%) and astigmatism (41%). Of the total individuals surveyed, only around one-third said they had sought treatment for their conditions.

Adding to this, the results fail to reflect a clear perception of the importance of a healthy lifestyle in relation to eye wellness, as 40% of the participants perceived no significant correlation between visual health and healthy habits. Aside from the influence of genes (66%) and, to a lesser extent, pollution (62%), there seems to be little awareness of the factors that affect eyesight or of others that might be adapted to improve vision.

However, when asked about their habits, 69% of those surveyed who acknowledged stress in their lives stated that their visual health was acceptable, contrasting with 81% of the participants who suffered no stress and gave that response. This clearly suggests that stress is an important risk factor to consider with regard to eye wellness. Insufficient sleep is another factor that seems to adversely affect visual health, although to a lesser extent. The survey results show that 78% of those who said they got enough sleep stated that they were satisfied or very satisfied with their eye wellness, compared to 67% of those who said they did not get enough sleep.

Sedentary or inactive lifestyles, which correspond to 59% of all Spaniards, are likely the reason why most of the participants stated that they engaged in activities that largely depend on short-distance clear vision (53% said they relied on this type of vision the most) and that they noticed this problem in their most frequently undertaken activities: checking mobile phones, using computers and grooming before a mirror. In this sense, attending public events is the least frequently reported activity.

In general, there appears to be no perception of the notion of eyesight significantly affecting the ability to undertake activities. However, poor eyesight was said to have a greater impact on two specific activities: driving (confirmed by 49% of those surveyed) and working (43%). Specifically, the participants stated that the greatest difficulties while driving occurred at night and in bad weather (respectively, 94% and 86% of those who reported eyesight causing difficulties while driving).

At least one-third of Spaniards suffer from symptoms of vision-related problems. In order of frequency, the most common are sensitivity to light, blurry vision, the sensation of failing eyesight and irritation, itching or burning. In this regard, having watery eyes is the most intensely felt albeit less commonly reported symptom.

The participants said they had noticed the symptoms when using devices, such as mobile phones, tablets and computers, although the cited causes include other factors, such as wind, dry environments and air conditioning.

The most frequently diagnosed vision-related problems are presbyopia (35%) and refractive defects, especially short-sightedness (33.8%) and astigmatism (31.4%), which by far and away surpass all other problems of this type.